Rubber couplings dampen and absorb shock and vibrations using the elasticity of rubber, while plastic couplings do the same with plastics. Their advantages include high flexibility, low noise, easy maintenance (because they do not require lubrication), simple construction, and long service life. They have been widely used in engines for construction machinery, ships, generators and the like, as well as in ordinary industrial machinery.

CENTAFLEX couplings and floating shafts (high-speed rotation) are used to connect the engine and propeller together.

Q : There is resonance occurring in devices run using diesel engines. Is there anyway to prevent this from happening?

Q : What does "Pre-compressed construction" refer to for the CF-A models?

A : Rubber has been shown to exhibit longer life if used while compressed rather than stretched. In particular, it has been found that even with compressed rubber in general, rubber that is first compressed to a certain degree before a force is applied has a longer life than other types of compressed rubber. This type of compression in which the rubber is compressed to a certain degree is referred to as pre-compression. CF-A models are assembled with rubber parts pre-compressed. The compressed parts have a long parts life and even sections with stretching rubber parts fail to stretch until a specified torque or higher is applied. 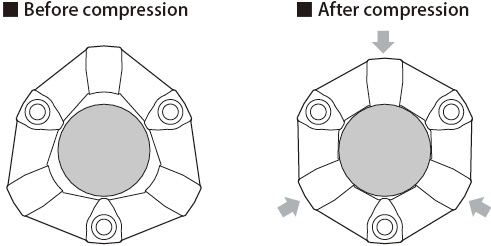 Q : Effects of heat on rubber couplings and coupling maintenance

A : When heat is applied to natural rubber, the oils on the surface of the rubber break down, which causes the rubber to lose elasticity and become hard. Although the rate and degree at which the rubber hardens varies according to the temperature, if heat is applied to a CF-A model part used within the engine housing, the surface rubber hardens. If torque is then applied to the affected section, cracks will begin to form in the hardened layer, causing the surface to break down. As part of maintenance guidelines, it is recommended that you change the rubber if the hardness increases by around 15 increments on the HS hardness scale compared to the hardness from before use.

A : When the hub is attached to the shaft, it can be attached using a CENTA-LOCK mechanism. Using a clamping screw to secure the parts in place causes the spline on the clamping hub to become warped, causing the spline on the shaft to be pushed up against it to ensure that the hub and spline shaft are securely fixed in place. Although it varies depending on the size used, if the clamping screw is screwed in at the specified torque, a retaining force equal to around 1 ton per clamping screw is produced along the shaft direction. This retaining force ensures that under normal conditions the parts are securely fastened in place at an adequate level. 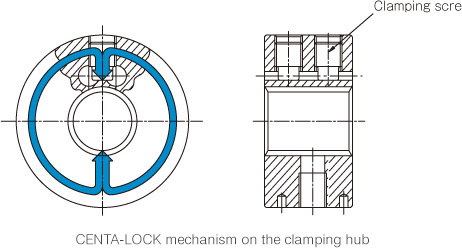